When Jesus died on the Cross for us, He did so much more than to just give us a path to salvation and an invitation to start a relationship with Him. He also gave us the power of His blood. 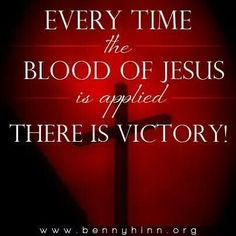 We know that His blood redeems us. We could never pay the price against us, so Jesus did it for us. It is His blood that redeemed us: “For you know that it was not with perishable things such as silver or gold that you were redeemed from the empty way of life handed down to you from your forefathers, but with the precious blood of Christ, a lamb without blemish or defect” (1 Peter 1:18-19).

His blood not only removed the punishment for our sin, but it also cleansed us. 1 John 1:7 tells us that “the blood of Jesus Christ His Son cleanses us from all sin.” Maybe you’ve heard the term “washed by the blood” before?

The blood of Christ also brings us into fellows
hip with God (Ephesians 2:13) and makes peace with God (Colossians 1:20)

When it comes to spiritual warfare, there is another aspect to the blood of Jesus that many believers are unaware of it seems – power over the devil.

When you come before God and confess your sins, those issues are under the blood. The enemy just lost the power to hold that sin against you.

One morning during my time with the Lord I was reminded of an old German myth or legend about a man named Siegfried who bathed in dragon blood which made him invincible. Except that while he was taking a bath in the blood a leaf landed on his right shoulder and since the blood couldn’t touch that spot, it was the only part of his body that could be pierced. Later he was betrayed and killed because of that one small spot that wasn’t covered by the dragon’s blood.

We do that, too, don’t we? We hold certain areas of our lives back and don’t want to give God access to those areas because we want to keep living the same way we always have.

Guess what? Those areas are not under the blood of Christ until we confess them to the Lord and allow Him to cleanse us. So essentially you are giving the devil access points, soft spots that he can and will attack.

But the beauty of our Savior’s blood is that it is always there. We have been granted access to it. The image the Lord showed me that morning was of somebody standing under a constant outpouring of the blood of Christ, being washed and cleansed, being covered continuously and as soon as that leaf was removed, that spot, too, was under the blood.

It is up to us to fully cover ourselves with His precious blood. He made it available to us, so don’t hold back from Him. Ask Him to identify those areas of your life and submit them to Him.

Plead the blood of Christ over yourself. Use the protection God has offered you.

So the next time the devil attacks you, you overcome and conquer him in the name of Jesus and with the blood of the Lamb. The blood of Jesus is more powerful than anything the devil tries to throw at you. He won’t be able to stand. That’s the power of the blood!